Lt. Matt Pennington, with the South Jordan PD, said at the scene that officers were in the area to look for a suspect who was wanted in an active recovered stolen vehicle case and had existing warrants as well.

“It was a ‘knock and talk’ at the residence to see if he was there,” Pennington said, adding that the officers “made contact with some people who live in the residence and they allowed them in to look for him.”

When the officers entered the home, they encountered the suspect in the basement, where he came out of a bedroom and fired several rounds at the officers.

“One of the officers was struck in the lower leg and was taken to the hospital in stable condition,” Pennington said.

“We returned fire, striking our suspect as well. He was taken to the local hospital and reported to be in stable condition,”  he said.

Protocol Team 2 is on scene investigating the assault on the officers, and the officer-involved critical incident.

“They’re working through that — obviously it’s going to be some time before they get to the end of the road on that, but that’s currently where we’re at,” Pennington told reporters.

He said three or four officers were in the home at the time of the incident, and the suspect was shot multiple times, but it wasn’t immediately known how many shots were fired in total.

The incident took place in a cul-de-sac on Tarali Court (1875 West), and police have the area closed off to traffic. Neighbors have been asked to stay inside, and those who are outside the area will have to wait awhile before they can go home, Pennington said.

Asked if officers are at greater risk going into a residence to look for a suspect, Pennington replied, “Obviously, we know we’re dealing with someone who has a known criminal history, we’re looking for him, we try to take precautions anytime we go into someone’s home.”

At this time, police are not releasing the name of the suspect or the officer who was shot. 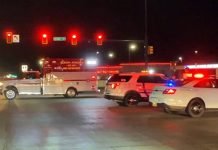 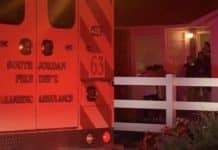