ST. GEORGE, Utah, March 13, 2019 (Gephardt Daily) — The last of three defendants not yet tried and sentenced in the 2016 kidnapping and murder of a St. Clara man has accepted a plea deal in the case.

Kelley Marie Perry, 34, of Washington City, was the former girlfriend of the murdered man, David Corey Heisler, who died at age 30 in June of 2016.

Perry pleaded guilty to one federal charge of kidnapping resulting in the death. In exchange for her plea, other charges were dismissed. Perry faces up to 35 years in federal prison in the death of Heisler, Perry’s former boyfriend and the father of her then-6-year-old daughter.

Heisler had been awarded sole custody of the daughter two weeks prior to his June 27 disappearance. After the judge’s June 13 custody decision, Perry had gone on social media to express her disappointment.

Also arrested in the case were Francis McCard and Tammy R. Freeman. According to a probable cause statement, Freeman admitted to police during an interview that she drove Perry and McCard to Heisler’s house, where both Perry and McCard assaulted him.

Perry and McCard admitted to detectives that after the encounter inside the home, they forced Heisler against his will into his own car, and that McCard allegedly dropped Perry off somewhere along the way to Mt. Trumball, in Ariz.

Heisler’s body was found on Aug. 19, 2016, in a remote area of the Arizona strip where McCard earlier had admitted to leaving the victim.

Heisler’s family has custody of his daughter, now 9. On Sunday, a member posted on the Facebook page “Justice and memory for/of David Heisler”:

“A couple of weeks ago we were notified that she (Perry) had agreed to accept the Federal Plea Deal,” the post says. “It’s not what everyone wants, but it’s what is best for one individual (Heisler’s daughter) and she’s all that matters in our lives.

“She’s 9, she’s amazing and she is fully aware of what this means for her life as we actively included her in our decisions over the past couple of weeks,” the post says in part.

“Life is nothing but a series of compromises, love them or hate them, we deal with them daily. We know our son will be relieved at the finality of this portion of our journey and that we can find peace again. It’s been so much emotion for us and a long process.

“We are at peace for this decision. Please keep us, yet again in your prayers.” 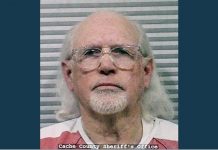