The leaked gas rose into the several buildings along State Street, on the west side of the road, Walker said.

“I don’t have an exact number of how many people were evacuated,” Walker said, adding the buildings evacuated large buildings and small, totaling about five.

“We blocked off the streets and evacuated people, and  Dominion Energy was able to come in and shut off the gas,” Walker said. That happened at 1:03 p.m.

It took hours to ventilate buildings and make them safe, he said. Natural gas is lighter than air, he said, so rises within a building, replacing air and making the environment deadly.

The SLCFD uses fans to create positive pressure, bringing in fresh air to replace the gas. Monitors are taken into buildings to determine the level of gas present, and to ensure no one will return before the air is safe.

By mid afternoon, traffic lanes in both direction were reopened.

Walker also said a scent is added to natural gas so people can be alerted to a leak. He said the odor may remain after the gas is gone, because the gas is lighter than the added scent, and dissipates first. 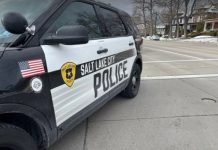 Crews on scene of gas leak in Murray