“As the driver was headed south, he crashed through a flower bed, took out a sign, struck three parked vehicles, and hit a power pole before jumping out of the Subaru and running across the street,” Keller said.

“There were a lot of witnesses who started to run after the suspect, then suddenly stopped. It is possible he had a gun, but that has not yet been confirmed.”

Keller said the suspect then carjacked a silver SUV that was parked across the street, and headed west on 2700 South.

“A few minutes later dispatchers got a call of another single-vehicle accident involving the stolen silver SUV at 2700 South 600 West, disabling the vehicle,” Keller said.

“The suspect then carjacked a black pickup truck, a block later hits another vehicle, continues onto the freeway, exits at 3300 South, and as he was headed west, he collided with three other vehicles, and the debris from that accident damaged two more cars.”

Keller said the suspect continued towards Salt Lake City, where he abandoned the truck and got into another vehicle.

“In all, 12 vehicles were damaged, two vehicles were car-jacked, possibly three, depending on where the first car came from, and the suspect is still on the run,” Keller said. “Thankfully no one was harmed in the incident.”

Unified Police Det. Ken Hansen said the man is believed to have committed an armed robbery somewhere in Salt Lake County in the past couple of days, but Hansen had not been provided any details about that incident. The identity of the suspect was also not known.

Investigators from Salt Lake City, Unified and South Salt Lake police departments all are working to piece this incident together, to locate the suspect, and to determine what caused him to crash into so many vehicles. 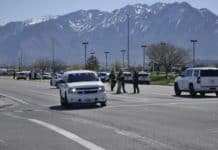 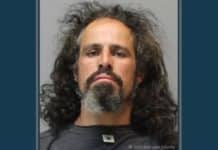