According to Woods Cross Police Chief Chad Sofee, the suspect, ultimately identified as Brian Craven, 52 was being served with a search warrant related to an ongoing child sex offense case.

“That case was coming to pretrial court today, and further victims came forward and gave us more information of evidence that may still be in the house,” Sofee said. “The Davis County investigators in the county attorney’s office issued a warrant and got it signed by a judge, and so we came back to the house this morning about eight o’clock. We knocked on the door, we didn’t get an answer.

“The door was breached and the suspect was at the top of the stairs,” Sofee said. “We told him why we were there, what we were doing, that we had a lawful search warrant and he refused to come out.”

Police began negotiations while the South Davis County SWAT team was called in. They  “decided that after negotiations had failed for over two hours that they would introduce gas into the house to try to get this suspect to come out,” the chief explained.

“The information we had from him, and his attorney, was that he had surrendered all of his weapons the first time we had done this a year and a half ago,” when the case was first opened. “We didn’t know if he’d obtained other weapons….”

“We did have information that he had a handgun in his nightstand, and that was from an unknown source,” Sofee told reporters.

“So once the SWAT team introduced gas, the suspect was actually on the phone with a negotiator. He said he’s not coming out and refused to comply. Then he said he would come out and gave us a time we let expire.

“He still didn’t come out, more gas was introduced in the house, and after that subsequent gas the suspect shot himself in the head with a handgun,” Sofee said.

“So this is the reason why we do ‘surround and call-outs’ because … it can be dangerous,” said Sofee, his voice momentarily choked with emotion.

“We want to go home at night, like anybody else.”

According to Sofee, the new accusations which triggered execution of Friday’s search warrant surrounded what was characterized as acts of “aggravated” child sex abuse.

“One victim that came forth yesterday said there were multiple times, probably we don’t have an exact count. I would say more than 30 to 50 times that it happened in different locations, in different states. 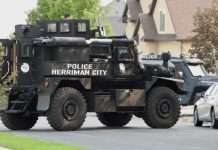