SPRING CITY, Utah, March 19, 2019 (Gephardt Daily) — Sanpete County Sheriff’s deputies responded to a call reporting shots fired Monday night and found themselves dealing with an armed man who was barricaded in a house.

Sanpete Sheriff’s Office Detective Derek Taysom told Gephardt Daily the incident began at about 5:30 p.m. when officers went to the home on Main Street between 300 North and 400 North to investigate a report of possible gunfire at that location.

Taysom said when it became clear that the man inside the residence was armed and refused to communicate with officers, Utah County SWAT personnel were called in to assist.

“They take over the tactical side of the situation, and we really appreciate their expertise. They tried contacting him by phone, and a megaphone also was used,” Taysom said, but at that point, the man resisted all attempts to communicate.

Officers then approached the front of the residence to try to contact the man.

The SWAT officers didn’t attempt to enter the home, but the man did come out and he came out shooting.

Taysom said officers returned gunfire and the man was hit.

He was transported to Sanpete Valley Hospital in Mount Pleasant.

“He was conscious and breathing and talking while they were transporting him,” Taysom said, adding that no report on the man’s medical condition was immediately available, and depending on the extent of his wounds, he could be transferred to a hospital in Salt Lake City if needed.

Taysom said police do not yet know of a motive for the man’s behavior, and the incident is still under investigation. Officials will probably be on scene well into the night, he said. 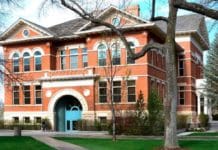