WEST VALLEY CITY, Utah, July 31, 2018 (Gephardt Daily) — Police are on the lookout for a suspect who fled a traffic stop on spiked tires, drove into another vehicle as officers pursued him, and then managed to disappear on foot into the night.

The incident began at about 11:45 p.m. Monday, when a West Valley City Police officer stopped the vehicle for a traffic violation near 3100 South and 1900 West, WVCPD Lt. Justin Wyckoff told Gephardt Daily.

“The officer checked the VIN (vehicle identification number) and it didn’t match,” Wyckoff said. “The vehicle was stolen. The driver knew what was up and was getting ready to run.

“The officer was thinking quick, though, and put spikes down right away.”

The suspect, a 41-year-old Caucasian man, drove off anyway and didn’t stop until he crashed into a car parked at the American Mobile Home Park, near 3100 S. Redwood Road.

Wyckoff said the driver jumped a fence and ran. Police set up a containment area, but the suspect wasn’t located.

A middle-aged male passenger in the stolen car was detained for questioning, however. Wyckoff said drugs were found in the vehicle.

“It’s just lucky there were no injuries in all this,” he said.

Cory Rodrigez, the owner of the car that was hit, was asleep at the time and didn’t hear the crash. He woke up to the sound of sirens.

“I was asleep. We heard a high-speed chase, cop cars, sirens. We ran out and the car wasn’t there. It was about 20 feet from where it was parked,” Rodrigez said. “I didn’t hear the crash, but someone heard it down the street and came over here.”

His girlfriend and her mother were also in the mobile home, and Rodrigez said, “They were worried that the car was gonna hit the trailer.”

He explained that, because of the location of the mobile home, he was in the habit of parking the car between the home and the road, so that if anyone lost control of their vehicle while turning in, they wouldn’t plow into the mobile home.

Considering that the crash moved Rodrigez’s car 20 feet and took out the outdoor lamp pole and mailbox, it’s probably a good thing he parked it where he did.

Of course, there’s a downside, too.

“It was a good-running car,” he said. “Now we’re without a vehicle.” 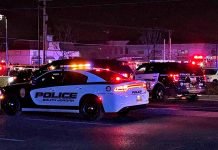