TAYLORSVILLE, Utah, March 17, 2022 (Gephardt Daily) — Taylorsville Police officials have released the name of the suspect fatally injured in a crash as he fled police in a stolen vehicle.

Jeremy Arthur Lettow, 40, was the man who died at a hospital from injuries sustained when he hit a power pole.

“Lettow fled officers after they spotted him in a stolen vehicle and tried to pull him over,” a statement from the Taylorsville Police Department says. The suspect was spotted at abut 11:45 p.m. Wednesday.

“A Department of Public Safety helicopter was dispatched to assist, and police were able to spike the vehicle’s tires. After driving further along Atherton Drive, Lettow then lost control of the vehicle and hit a power pole.”

“Lettow has an extensive criminal history, including robbery and felony fleeing,” the statement says. 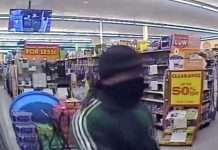