A probable cause statement from the 3rd District Court of Salt Lake County said Kelly Vaughn Burge, 23, is facing charges of:

On Dec. 21, 2020, officers were dispatched to Smokey’s Discount Cigarettes, at 1597 W. 9000 South in West Jordan, on reports that a man had been struck by a vehicle, the statement said. The suspect vehicle had left the scene.

The victim was transported to Intermountain Medical Center in critical condition.

“Responding officers reviewed the video of the incident and found that an aggravated robbery had occurred,” the statement said. “The surveillance video shows the suspect inside the smoke shop. The suspect exits the store as Zachary follows in chase. Witnesses on scene described that they saw the suspect vehicle run over the victim multiple times.”

Surveillance video was obtained from a nearby business, the statement said. That video shows that a red or maroon colored vehicle believed to be a Buick Verano runs over the victim multiple times.

On Dec. 25, police apprehended Burge when he allegedly was involved in a robbery in West Valley City. When he was arrested, he was in a red or maroon Buick Verano.

Burge was interviewed at Salt Lake County Jail; after being read his Miranda rights, he reportedly admitted to entering the smoke shop and taking items. He also allegedly admitted to running over the victim. 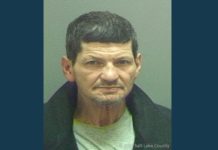 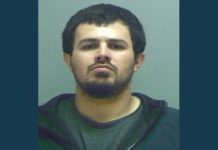