TAYLORSVILLE, Utah, May 26, 2022 (Gephardt Daily) — Taylorsville police have arrested a man they say hijacked a car out of West Valley City, and was observed driving it in Taylorsville.

The suspect, 29-year-old Xavier Contreras, was jailed on six felony charges, related to the vehicle theft, burglary, drug possession and possession of a dangerous weapon by a restricted person.

A Taylorsville Police patrol officer observed the car on Wednesday night, and learned the occupant was believed to be armed.

The officer saw the car drive past, then located it parked in the area of 5590 S. 3465 West. The driver entered the car, which had no passengers, and drove south.

“Officers were positioned south and west of with tire spikes,” says Contreras’ probable cause statement. “The vehicle approached the spikes and stopped and began driving in reverse. I activated my red and blue lights and exited my vehicle and ordered the A.P (arrested person) to stop the vehicle. He failed to do so and continued west driving over a set of spikes.”

The driver continued to flee for several miles, the statement says, “driving over residential lawns, driving in on coming traffic and into residential neighborhoods. Because of the great danger, the A.P. placed on the community and the feeling his actions if continued would cause a fatal accident, the pursuit was terminated. Unmarked vehicles were able to follow the vehicle until it crashed on its own.”

The driver was seen running from the vehicle and into a residential neighborhood, the probable cause statement says.

“While fleeing from officers on foot, the A.P. forced his way into an occupied home
with an adult female and infant child inside the home. The A.P. while inside stole a purse belonging to the homeowner. The A.P., after committing the burglary and theft, fled out of the house where he was contacted by law enforcement and taken into custody.”

Post Miranda, Contreras declined to speak with officers, but did state “That’s not my gun,” the statement says.

Contreras is being held without bail. 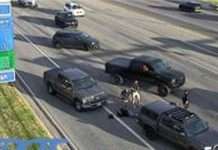 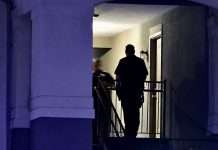