SOUTH JORDAN, Utah — A SWAT team responded to a South Jordan residence on Saturday morning, and a man suspected of beating his girlfriend and holding her hostage overnight is barricaded inside.

“He held her captive, but eventually she was able to get away and called police.”

Police responded to the scene, but the suspect went into the house and had not come out yet, Pennington said at 5 p.m.

“We’ve held containment and tried negotiations, to no avail,” Pennington said. “So the SWAT team is standing by.”

Drivers are asked to avoid the area, which is at 3200 West and 10900 South. Nearby roadways are closed for public safety. Pennington said it was unknown if the suspect is armed.

He also said the victim had clearly visible injuries, but did not require hospitalization. 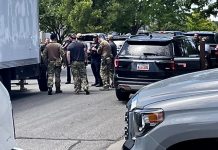