SALT LAKE CITY, UTAH – November 10, 2015 (Gephardt Daily) — Caregivers who limit their conversation with babies and toddlers may be giving the children a disadvantage that will last a lifetime.

“Studies have found that about 80 percent of a child’s brain is formed by age three,” Mendoza said. “We know oral and reading vocabulary are predictors of reading success.”

McAdams announced the county’s endorsement of the national “Talking is Teaching” program, aimed at closing the vocabulary gap between children from low-income homes and those from higher-income homes.

In the first two years, a child forms an average of 700 neural connections, according to research compiled by the Too Young To Fail Foundation (tooyoung.org). By age 6, a child’s brain will have reached about 90 percent of its adult capacity, according to cited research.

“It’s a national multi-media campaign we are bringing to Utah for the first time,” McAdams said. “The simple act of talking to your baby and your young child sparks brain development, and has a lasting effect on a child’s ability to learn and grow through their life.”

Dr. Kerry Whittemore, a pediatrician who spoke, said talking to babies and toddlers should happen at every opportunity. She does it with her own child.

“To be honest, I feel kind of silly having these conversations with a baby who can’t talk back to me,” she said.

Whittemore said the easiest way to teach is to “narrate life,” engaging the child and commenting on what you see and do as you take a walk, shop for groceries or do chores at home.

“It sometimes feels a little bit ‘not normal’ to have completely one-sided conversations, but it’s the best thing you can do for your child for your child to learn language,” said Whittemore, who works at the U of U’s Redwood Health Center and has many patients who are from refugee or immigrant families. She said talk in any language can help a young brain form; the talk doesn’t have to be in English.

Details on the “Talk to Teach” program can be found at talkingisteaching.org. The site also has tips and suggestions, in English and in Spanish. 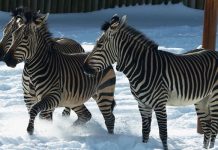 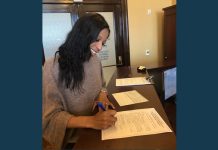 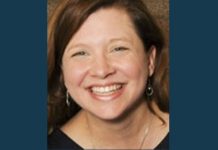