According to Iron County Sheriff’s Office spokesman Lt. Del Schlosser, UHP Trooper Scott Mackleprang radioed at 5:35 p.m. that he had been involved in an accident. ICSO Deputies and other UHP troopers responded to the scene.

Witnesses told troopers the 18-year-old male, driving a 2014 Chevrolet Camaro in the left lane, slowed very quickly, almost to a stop, in what appears to be an attempt to make a U-turn through the median.

Mackelprang and his K-9, Hasso, were following behind the teen and he was unable to avoid a collision.

Both the trooper and the teen were wearing seatbelts and were not injured. Hasso was taken to a local veterinarian for a precautionary examination.

“A reminder to the public; the crossovers are for emergency vehicles only. If you find yourself needing to change directions, you should use the next available exit,” Schlosser said.

The accident is still under investigation but alcohol and drugs do not appear to be factors in the accident. Both vehicles received major damages. 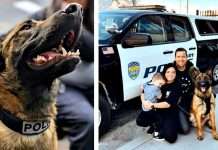