Enrique Lara, 19, was arrested Sunday night and charged with two counts of aggravated robbery, a first-degree felony; and possession of a deadly weapon with intent to assault, a class A misdemeanor.

According to a probable cause statement filed in 3rd District Court in Salt Lake, a man told police that he was selling an iPhone on Facebook Marketplace and met with a potential buyer, later identified by the victim as Lara, at 4665 S. Carnegie Tech to make the transaction.

The victim said he let Lara handle the phone so he could check it out, and that’s when Lara allegedly pulled out a firearm and said, “You didn’t see me, and this didn’t happen.” He then ran north on Carnegie Tech and turned east onto Trinity Avenue, and the victim lost sight of him.

Footprints were found, and a K9 was used to track him to a residence on Trinity Avenue, the probable cause statement says. The reporting officer wrote in the statement that he entered the house with the homeowner’s permission and called out to Lara, who was downstairs. Lara came up the stairs with his hands up.

After being read his Miranda rights, Lara reportedly told the officer that he was involved with the robbery. The officer found the iPhone and the gun where Lara said they were.

After being identified by the victim who was selling the iPhone, Lara declined to answer any more questions.

Lara also fit the description of the man who had committed an aggravated robbery on Saturday night, when “a pair of blue Jordan basketball shoes were taken and the victim was pistol-whipped several times.”

A pair of blue Jordan basketball shoes were found where Lara kept his personal property in the residence, the charging document states. 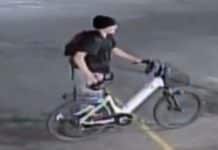