MURRAY, Utah, March 26, 2022 (Gephardt Daily) — The Wasatch Back Major Crimes Task Force served a search warrant on Thursday at a Heber City residence, and allegedly located a large amount of illegal drugs believed to be intended for sale to community members.

“During the warrant service, law enforcement located a large amount THC Dabs, psilocybin mushrooms, marijuana, and money,” says a Facebook statement posted afterward. “It also resulted in the arrest of two individuals who are suspected of selling these drugs in our community.”

According to online court records, the suspects, both 18-years-old, face initial charges of:

One of the teens faces an additional charge, of allegedly giving false personal identity to a peace officer, a class C misdemeanor

“The warrant resulted in the seizure of 249.47 grams of shrooms, 221.12 grams of ‘dabs,’ 862.2 grams of raw marijuana, $607.00 in cash, cocaine paraphernalia with testable amounts and multiple items of paraphernalia for the distribution, packaging and consumption of narcotics.”

Both cell phones were seized “and warrants sought to search them as the sales were conducted via social media,” the statement says.

The teens were transported to the Wasatch County Jail, where they are being held without bail. 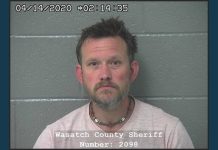