“Park City Mountain regretfully confirms a serious incident which took place on the mountain yesterday, Dec. 31, involving a 20-year-old male from Sherman Oaks, CA,” said a statement from the resort. “After further emergency care and evaluation, the man was pronounced deceased by AirMed.”

The resort did not confirm the name of the deceased man.

However, TMZ, People magazine, The New York Daily News and multiple other national outlets said the deceased is Charles Augustus Noxon, who goes by Charlie, son of Kohan. He was in Park City for the holiday with his father, journalist Christopher Noxon, and two siblings, TMZ said.

Kohan and Christopher Noxon announced they were divorcing on Dec. 24, 2018, according to Wikipedia.

“Kohan has three children,” the page says. “The oldest was her son Charlie, who died in a skiing accident on Dec. 31, 2019; the middle child is her daughter Eliza, and the youngest is her son Oscar.”

Charlie Noxon’s Facebook page said he was a student at Columbia University in New York. 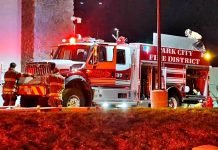