TOOELE, Utah, July 20, 2016 (Gephardt Daily) — The massive fire which destroyed 10 homes and damaged 8 others in Tooele Tuesday night appears to have been intentionally set.

According to Deputy State Fire Marshall Brian Thatcher, arson investigators with the state of Utah are working closely with local law enforcement agencies in trying to determine exactly how the fire was set and who may have set it.

Fire investigators told Gephardt Daily the blaze began just before 11 p.m. near American Way and quickly spread to a nearby mobile home park.

Dozens of residents were evacuated, and firefighters from a half dozen jurisdictions joined forces to beat back the flames.

The Red Cross set up a safe haven for those residents who were forced to evacuate their homes at West Elementary School, 451 W. 300 South.

High wind, a shortage of water at a number of hydrants, and the loss of electrical power all created significant challenges for firefighters.

They were also forced to deal with a steady stream of small explosions, some of which were triggered by the gas tanks of cars and trucks which were overrun by flames.
Two Grantsville firefighters were treated and released for smoke inhalation. 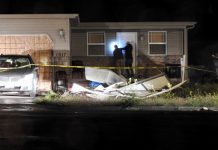 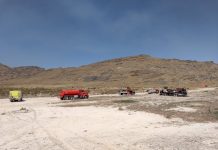 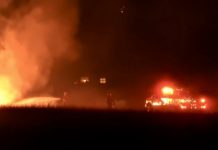