The first rockfall came down on Hidden Canyon Trail late Monday afternoon in the section in which hikers are required to hold onto chains, covering approximately 45 feet of trail in one-and-a-half feet of sand, park spokeswoman Aly Baltrus said in a news release.

“Due to a rockfall, the East Rim trailhead is closed,” the news release said. “This includes access to Hidden Canyon, Observation Point, and all technical canyons that would start at Weeping Rock.”

On Tuesday, park officials said another rockfall had occurred in the same area, and the trail will be closed until at least Thursday.

“Park staff monitoring the rockfall area on Tuesday witnessed another rockfall late in the day,” the news release said. “The trail will remain closed until a hazard geologist examines the situation and the trail can be cleared.”

The trail was built in 1928 and leads from East Rim Trail into the side ravine between Cable Mountain and the north wall of the Great White Throne, officials said.

All other trails are open.

For the latest information on the closure click here. 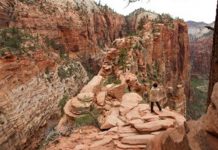 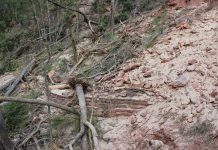 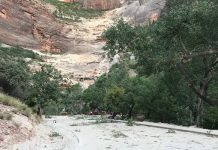