LAKE POINT, Utah, Jan. 10, 2016 (Gephardt Daily) — A late-night fight over a parking space at a Tooele County truck stop has landed one man in the hospital, while two others are on the lam, making their getaway in a flatbed truck thought to be hauling lumber.

According to Tooele County Sheriff Lt. Travis Scharmann, the incident happened just before midnight Saturday when two truck drivers got into an argument at the Flying J located on East Saddle Back Drive in Lake Point.

“Both drivers had one other person traveling with them, and during the altercation one of passengers stabbed the other,” Scharmann said. “Neither driver were actually involved in the stabbing.”

Scharmann said the victim was air-lifted to the University of Utah in serious condition but has since been upgraded.

Deputies are still looking for the suspects who are described as two foreign nationals with light complexions, speaking broken English.

They were seen driving a semi-truck with a white cab and a flatbed hauling wood.

Anyone with information on the suspects is asked to call Tooele County Sheriff Dispatch at 435-833-8000. 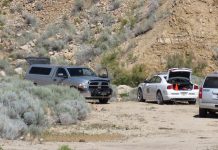