Tymel Devonne Hicks, 27, has been charged with:

Both suspects allegedly were involved in beating the man and woman, described in charging documents as a “homeless couple,” forcing them into a bathtub, pouring gasoline over them and forcing them to drink some of the gas while threatening to set them on fire.

According to a probable cause statement filed in 3rd District Court in Salt Lake County,  Hicks had the couple over at his apartment, near 3700 South and 700 West, on March 10.

There was an argument over a missing gun, the charging document says, and Hicks allegedly beat the two victims, then called three other men over to the apartment to help continue the assault.

The victims told police they were pistol whipped and hit in the head with the butt of a shotgun.

After being forced into a bathtub where gasoline was poured over them, the victims were forced to undress and put on other clothes supplied by the suspects, while their own property, including cellphones, was taken from them.

“The victims were finally able to get out of the apartment and were transported to the hospital where it was learned the male victim has sustained a spinal fracture in addition to show marks all over his back and shoulders. He also has a large gash over his head and numerous bruises,” the statement says.

“The female victim suffered a skull fracture along with bruises and other injuries she received from the assault.”

When Fitisemanu was interviewed by officers, she said “she had been in her room with the children and had not heard anything and no one came to the apartment,” according to the charging document. She claimed she didn’t know the victims at all.

The victims gave separate statements saying they knew Fitisemanu and had seen her at the apartment. 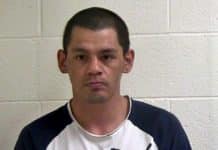