Major delays are expected on local streets near the stadium both nights, according to a joint news release Thursday from the Utah Department of Transportation and Utah Transit Authority.

“Garth Brooks tickets will be valid as free fare on UTA all day for the date listed on the ticket, and UTA will provide extra service on Friday and Saturday,” the news release states.

Extra TRAX service planned for the concerts include:

UDOT officials say heavy traffic is expected on Foothill Drive, 400 South and 500 South, as well as I-80 in eastern Salt Lake County beginning as early as 3 p.m. and continuing until midnight Friday and Saturday.

UDOT traffic engineers will be monitoring conditions and adjusting nearby signals to help traffic flowing to the stadium prior to the concert both nights, according to the news release.

Other area roads expected to see heavier than normal traffic include I-15 from 600 North to the I-215 interchange in Midvale, the I-215 east and south belt routes, and State Route 201. 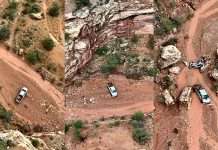