The crash occurred at about 12:36 p.m., according to a Utah Highway Patrol news release.

A gray BMW SUV was northbound on I-15 near mile marker 114.5, and a semi with a flat tire was off the right side of the road.

“As the BMW approached the area of the semi, it appears that it suddenly swerved to the left into and through the left lane and to the edge of the pavement,” the UHP statement says. “The BMW then served back to the right, sliding sideways and off the right side of the road.”

The BMW then started rolling and rolled up an embankment and into a tree.

UHP said the 53-year-old driver, who was wearing a seatbelt, was deceased at the scene. His name has not been released at this time.

“Alcohol impairment is being investigated as a possible contributor of the accident,” the news release states. “MCIT and SBI were called and are involved in the investigation.”

Gephardt Daily will update the story as more details are made available. 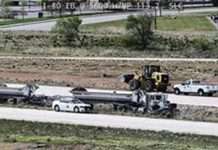