TOOELE COUNTY, Utah, Feb. 12, 2021 (Gephardt Daily) — The Utah Highway Patrol has identified two men — one of them a murder suspect — arrested and booked into the Tooele County Jail after a high-speed chase on Interstate 80 on Thursday afternoon.

The suspects are 18-year-old Mauricio Eduardo Johnson and 46-year-old Von Eric Keener, both of Loleta, California. Johnson has been identified as the suspect in a triple murder, according to California’s Humboldt County Sheriff’s Office. Keener was arrested on a warrant, that department said.

UHP Trooper Chris Bishop told Gephardt Daily he had no information on a woman who also was detained, and did not know her name or whether she had been charged.

Troopers in Tooele County were able to spike the tires of the suspects, about three miles west of Delle at mile marker 73, and to take them into custody at approximately 3:30 p.m., UHP Lt. Nick Street told Gephardt Daily on Thursday night.

“We had a little bit of advance notice that they were from Humboldt County and may have been traveling in that direction at that time, so we were able to put some contingencies in place in case they didn’t want to submit to being placed in custody,” Street said.

“We made sure we had spikes ready to go at the time we decided to attempt a traffic stop and fortunately we did and it worked and we were able to safety get everybody into custody.”

Street said the suspects will be extradited to California’s Humboldt County.

“BREAKING: The suspect in the homicide of three Bear River residents has been taken into custody in Utah,” it says. “The suspect has been identified as 18-year-old Mauricio Eduardo Johnson of Loleta. Johnson will be held on a no-bail warrant for charges of murder.

An earlier news release by the Humboldt County Sheriff’s Office offered details on the murder investigation. 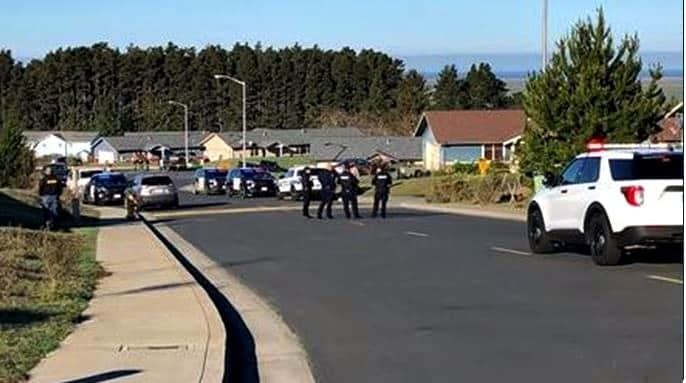 “On Feb. 10, 2021, at about 8:12 a.m., Humboldt County Sheriff’s deputies were dispatched to the 200 block of Carroll Road on the Bear River Band of the Rohnerville Rancheria Reservation for the report of multiple victims with serious injuries discovered inside a residence.

Bear River Tribal Police officers were first to arrive on scene, and located two deceased victims, the statement said. A third victim, who had sustained critical injuries, was transported to a local hospital, where she succumbed to her injuries.

“The Humboldt County Major Crimes Task Force was activated and is investigating these three deaths as homicide. Cause of death for the victims is pending autopsy. Sheriff’s Investigators have identified a person of interest in this case, however, no arrests have been made at this time.

“The victims have been identified as Nikki Dion Metcalf, age 40, Margarett Lee Moon, age 40, and Shelly Autumn Mae Moon, age 16. The Humboldt County Sheriff’s Office sends its deepest condolences to the family of these victims and to the Bear River Band of the Rohnerville Rancheria Tribe as a whole.”