According to the UHP, the accident happened about 1:24 a.m. Saturday when a 2006 Toyota Tundra with three people inside skidded and rolled near the on-ramp area by mile marker 272.

UHP investigators say the driver of the car was unrestrained and ejected from the vehicle.

He was pronounced dead at the scene after first responders were unable to revive him.

Two other occupants, both of whom were wearing seatbelts, sustained minor injuries.

Investigators have yet to determine what caused the crash. 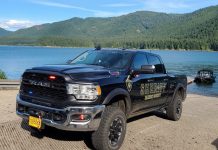