RIVERSIDE, Utah, Aug. 4, 2021 (Gephardt Daily) — A man died on the scene of a two-vehicle collision Wednesday morning in Box Elder County’s Riverside, a statement from the Utah Highway Patrol says.

“The accident was reported as T-bone type accident,” the UHP statement says. “A gray Honda Accord was northbound on 4400 West and a green GMC truck was eastbound on SR-30.

“The driver of the Honda failed to stop at the stop sign for northbound traffic. It entered the intersection directly into the path of the GMC pickup. The truck impacted the driver’s side of the Accord. Both vehicles spun to the northeast and came to rest against each other.”

The man driving the Honda was “killed on impact and pronounced dead on scene,” the statement says. “The driver of the GMC pickup sustained minor injuries.”

Alcohol is being investigated as a possible contributor. Investigators are also looking into another possible contributor to the accident, a cement truck that was parked along the road in front of the house on the southeast corner of the intersection, which was blocking or partially blocking the view of the stop sign.

Gephardt Daily will have more details if information is released. 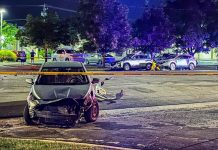 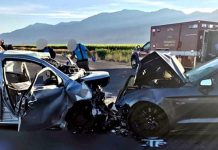