Investigators say Romrell, 31, was run over by two suspects outside a business near 3575 South and West Temple Street while investigating a burglary Nov. 24.

South Salt Lake Police said in a news release the funeral will be held on Wednesday, Dec. 5 at the Maverik Center, 3200 Decker Lake Drive, West Valley City. The public viewing will be from 9 a.m. to 10:30 a.m. and the service will begin at 11 a.m.

The funeral procession is expected to begin between 12:30 p.m. and 1 p.m. Wednesday.

A probable cause statement released by the 3rd District Court said the incident began when South Salt Lake Police officers were dispatched to the burglary in progress.

Suspect Jeffrey Don Black, 43, told officers in an interview that he and another suspect, Felix Anthony Calata, 32, went to the address of the incident in a vehicle to “collect a debt.” Black stated they were unable to gain entry, and were going to leave when he saw police officers with their red and blue lights activated on their vehicles, at which point Calata, who was driving the car, accelerated in an attempt to flee and hit Romrell.

Calata was shot by police and was transported to an area hospital where he died from gunshot wounds.

“Jeanette and I join the entire South Salt Lake Police family in mourning the death of one of our finest, Officer David Romrell. He was exemplary in every way, and I feel humbled by the service he gave his country as a Marine, as well as the service he gave our communities here in Utah. We mourn with and for Officer Romrell’s dear family, and we pray that they may find peace in the midst of this heartbreak.”

The governor will order the lowering flags to half staff Wednesday across the state of Utah.

The Marine veteran is survived by his wife and their 4-month-old son.

Romrell was the first South Salt Lake police officer to be killed in the line of duty. 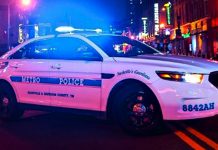 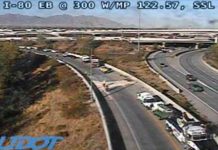 Rollover, cleanup causes delays on ramp between I-15, I-80