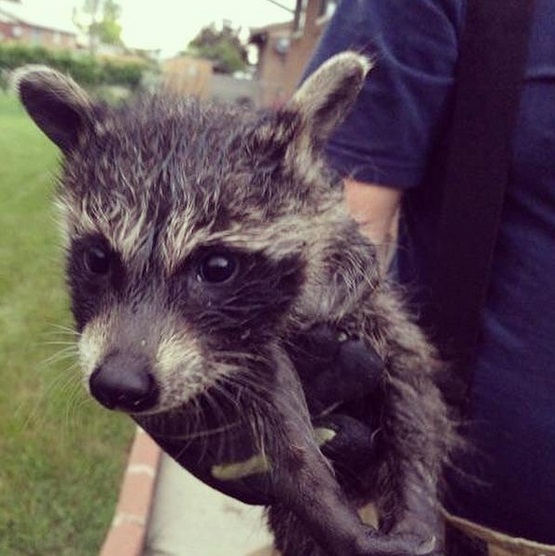 TAYLORSVILLE, UTAH – April 4, 2015 (Gephardt Daily) Firefighters in Taylorsville rescued some furry baby raccoons and their mom from a chimney in Taylorsville Wednesday night.

“The homeowner at 4544 S. Driftwood in Taylorsville came into the fire department to ask for help in getting some raccoons out of his chimney,” said Unified Fire Captain Sam Christensen. ” We called animal control but they consider raccoons to be pests and not domesticated animals so we knew we would need to help him.”

Once crews arrived they discovered the raccoons were about 15 feet down the chimney and they would need to maneuver quite a lot to perform the rescue. “We got a 15 foot PVC pipe and tied a rope through it with a noose, we were able to grab two of the babies that way,” said Christensen.

According to Christensen, the mom, who came out of the chimney after the first baby was pulled up, took off to the neighbor’s yard and has not been seen since and the other two raccoons were pulled through the fire pit from inside the home.

“We left the decision of what to do with the babies up to the homeowner and suggested he put them in a box so the mom can come back to find them but he wanted to release them into the wild,” said Christensen. “We are not sure at this point what he choose to do.”

Christensen said that it is not too common for them to nest inside a chimney, stating they usually like to either be in the basement or attic. “We think the mom may have just decided to give birth to the babies inside the chimney and they have been there ever since,” said Christensen.