Officers pursued the suspect, who has multiple felony warrants. The suspect was able to get away, and his vehicle was found, abandoned, shortly afterward.

A containment was set up, and a Utah Highway Patrol helicopter joined in the search, but the suspect was not found.

The suspect, whose name is known to police, is also a suspect is recent armed robberies, Hansen said. 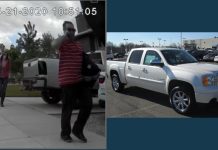 Truck stolen out of Taylorsville driveway, suspect backs into owner in haste to flee