WEST VALLEY CITY, Utah, Jan. 27, 2020 (Gephardt Daily) — Unified Police say they have a suspect in custody Monday night in the abduction of a Hunter High School student earlier in the day.

Granite School District issued an alert to parents to make them aware of the incident, while police immediately began the investigation.

No further details are being released Monday night, about the abduction or the person in custody.

Gray said officials were planning an increased police presence in the area, as well as advising students to walk in groups to and from school and avoid being out alone if at all possible.

She also suggested that adults who are home during the day make a point of going outside while kids are walking to and from school, as a deterrent for anyone who might be thinking of forcing a young person into their vehicle.

Until it is known whether the individual in custody is the actual suspect in the Monday abduction, it’s advisable to exercise caution. 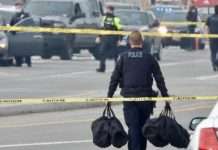