HOLLADAY, Utah, Aug. 8. 2020 (Gephardt Daily) — Unified Police officers were involved in a shooting on Saturday after they were dispatched on a call of a suicidal man with a gun.

The call came in at about 12:15 p.m., and officers from the Millcreek and Holladay precincts were dispatched to the scene, a parking structure at 3210 E. 6200 South, in Holladay.

“The subject was armed with a handgun. Officers negotiated with the man for approximately 30 minutes,” a statement from the Unified Police Department says.

“At 1:13 p.m., an officer-involved shooting occurred. The subject was transported to a local hospital in critical condition. No officers were injured.”

Several officers were equipped with body cameras that were active at the time of the incident, the statement says.

Officials outside UPD are investigating the incident, in keeping with officer-involved critical incident rules.

“This protocol creates an independent, transparent, and objective process from which meaningful and valuable conclusions can be drawn,” the UPD statement says.

“Once the investigation is complete it will be presented to the Salt Lake County District Attorney’s Office for review. At this time, there is no further information that will be released.”

This was northern Utah’s second OICI incident of the day. The first happened at about 4 a.m. in Clinton, and involved Roy Police officers. One man was shot and killed and another was taken into custody.

A police dog was shot in the face, but is expected to survive. To read that story, click here. 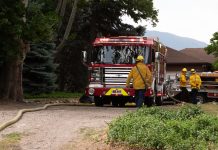