BIG COTTONWOOD CANYON, Utah, Aug. 15, 2022 (Gephardt Daily) — The Unified Police Department has released the name of a local woman killed Monday morning when the SUV she was in collided with a dump truck that had crossed into oncoming traffic.

The woman was 36-year-old Jessica Keetch Minnesota, of West Jordan.

“The others’ conditions remain the same,” the UPD statement says. “Our deepest condolences.”

Unified police had previously said the woman killed was in her late 50s or early 60s. They identified others in the vehicle as a 4-year-old boy, who was airlifted to an area hospital in extremely critical condition, a 2-year-old girl in serious condition, and a woman in her 30s who was in critical condition.

Sgt. Melody Cutler, UPD, later confirmed that it was the younger woman who died, and the older woman, age 61, who was critically injured.

Also transported with serious injuries was the dump truck driver, Cutler told reporters at the scene.

“There was a dump truck headed down Big Cottonwood Canyon, and what he’s telling us is that he lost his brakes and so he was going to attempt to do like a makeshift runaway trickling into the side of the mountain,” she said.

“Unfortunately, as we come around this curve here, it’s at Split Rock, as we all know, has very, very limited visibility coming through. There was a vehicle traveling up that canyon, and, unfortunately, this happened at the exact same time… and those two vehicles collided.”

The roadway was closed for several hours but reopened to traffic in both directions Monday afternoon. 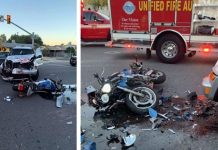