CENTERVILLE, Utah, June 25, 2020 (Gephardt Daily) — One person has died after a small plane crashed in the Centerville area of Davis County Thursday afternoon.

Both occupants of the plane were in critical condition after the crash; Lt. Zan Robison with Centerville Police Department confirmed to Gephardt Daily Thursday evening that one occupant has died. It’s not known at this early stage if the deceased is the pilot or the passenger.

Robison said officials are having difficulty contacting the next of kin of the deceased, but it’s likely that individual’s identity will be released later Thursday evening.

“It was just west of Legacy and Parrish,” Street said. “There were two occupants in the aircraft, and it went down down near an RC area.”

Street said it was an area in which remote control model planes are flown.

People who were nearby raced to the aid of the pilot and passenger, and pulled them from the burning craft. The two were transported by medical helicopter in critical condition, Street said.

The burning plane sparked a grass fire that grew to a half acre before it was knocked down by the Farmington Fire Department. 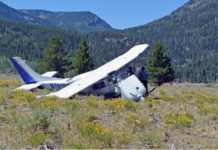