SANDY/SOUTH SALT LAKE, Utah, Jan. 9, 2021 (Gephardt Daily) — An 18-year-old male is in custody Saturday night, suspected of driving under the influence and multiple other moving violations after he allegedly was involved in a series of crashes on Interstate 15.

At about 7:38 p.m., Salt Lake Dispatch received a call on a hit-and-run accident in the area of 8900 South on I-15 northbound, involving a white, F350 Ford pickup truck, according to a Department of Public Safety news release.

Another driver saw the collision and followed the truck, while calling to report the incident. Other drivers also reported that the Ford pickup was driving recklessly.

Troopers responded at various locations along the freeway, and a trooper encountered the pickup at 3300 South, where three additional vehicles were hit by the truck, the news release says.

The suspect continued to flee and is believed to have hit a light pole, as well as the trooper’s vehicle.

“The Ford pickup turned around and continued South on I-15 where 2 additional cars were hit between 9000 South and 10600 South. At this point, the Ford pickup sustained a flat tire,” the news release states.

The driver got out of the truck and began walking along the off-ramp at 10600 South, where troopers caught up with him and took him into custody. 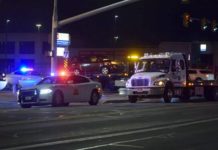 Driver suspected of causing multiple crashes along I-15 between Sandy, South Salt Lake