LEHI, Utah, July 8, 2022 (Gephardt Daily) — The Utah Highway Patrol is investigating a late night crash which claimed the lives of two people and injured a third.

Sgt. Cameron Roden told Gephardt Daily the incident happened in the northbound lanes of I-15 in Lehi about 10:58 p.m.

According to Roden, a Honda Pilot SUV was stopped in traffic with its lights off when it was struck from behind by a northbound Toyota traveling at freeway speeds.

The Toyota’s driver was taken to the hospital in fair condition.

The crash victims’ identities have not yet been released. 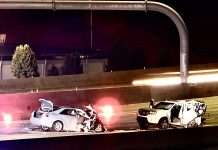 2 critically injured in late night crash on I-15