TAYLORSVILLE, Utah, Jan. 23, 2021 (Gephardt Daily) — Two people are in custody and a third is at-large after police responded to the area near 2300 West and 4800 South in Taylorsville overnight, with reports of shots fired while officers pursued suspects in a Sandy vehicle burglary.

The incident began about 1 a.m. when two vehicles were seen by a metro gang officer as they sped northbound onto Interstate -15 at 7200 South. Thinking there was a possible road rage incident taking place, police began to follow the vehicles and said it appeared shots were being fired from one of them.

Police lost sight of both vehicles for a short while near the Interstate 215 Redwood Road exit.

Another officer soon spotted one of vehicles at 2200 West and Quailstone Drive. Police followed it into Taylorsville where the suspects ran from the vehicle and into a neighborhood.

One person on scene was taken into custody after an encounter with a police K9, while two others were believed to have escaped.

Arriving officers reported hearing gunshots, and a wide containment perimeter involving police from multiple agencies was set up around the neighborhood.

Police used a drone and heat-seeking cameras to surveil backyards and fence lines while reverse 911 calls went out to residents telling them to shelter in place.

After a couple of hours, police determined at least one suspect was reported hiding in a nearby home.

A SWAT team was called in and police negotiators were able to successfully talk two occupants into coming outside peacefully. Police then obtained a search warrant and entered the residence where a third person, believed to be one of the car burglary suspects, was taken into custody.

Investigators have yet to determine the relationship between the residents and the suspect, if any.

Police said it’s also unclear where the second vehicle ended up, but they do not believe anyone was injured.

Unified Police Detective Ken Hansen told Gephardt Daily there were a number of details still being tracking down and that more information would be forthcoming once investigators had more time to work the case. 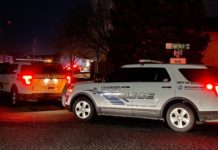