First responders were dispatched to the crash site near 400 S. State St. about 9:23 p.m.

When emergency crews arrived, they found two people who had sustained what proved to be fatal injuries.

At 9:23 p.m. officers were dispatched to the report of a traffic accident at 400 S. State Street involving two vehicles.

When officers arrived they found two vehicles had been involved in an accident in the intersection. There were three passengers in one vehicle and one in the other.

The passengers who passed away in the accident were females in their 20s. This accident is still being investigated to find the cause. More info will be released at a later date. 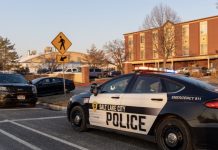