UTAH COUNTY, Utah, July 29, 2019 (Gephardt Daily) — Authorities in Utah County say a 23-year-old man from Mexico was killed Sunday afternoon after being struck by a falling log or rock at Bridal Veil Falls in Provo Canyon.

In a news release Sunday night, Cannon said deputies were dispatched shortly before 2 p.m. on a report of a seriously injured man at the base of the main falls at Bridal Veil.

It was first thought that the man had fallen, but after investigating, it was learned that something had fallen from the first terrace at Bridal Veil Falls and struck him. Investigators believe the object was likely a large log, the news release states.

Cannon said there is no reason to think the debris fell because of other hikers in the area.

Family members who were with the gravely injured 23-year-old tried to revive him, but he died at the scene. When deputies and North Fork Fire Department medical personnel arrived, they saw that his injuries were fatal, and volunteers with UCSO Search and Rescue assisted in removing the victim from the falls.

His body was taken to the Utah Office of the Medical Examiner in Taylorsville.

“Family said he (the victim) was planning to be here for about two weeks to attend a family function,” Cannon said in the news release. “He has other close family who are outside the United States, so we will not release the name of the victim until those family members have been notified.”

UCSO Victim Advocates are working with the Office of the Mexican Consulate in Salt Lake City to help facilitate notification. 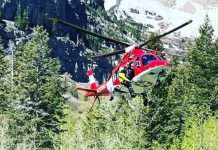