All four have been charged with aggravated burglary, aggravated assault, possession of a dangerous weapon by a restricted person, and failure to stop at the command of a police officer.

These charges also include gang enhancements.

UPD officials told Gephardt Daily that the call of shots fired came in June 15 at about 11 p.m. As officers were heading to the area of 6536 S. 4140 West, a second call was received, this one reporting a home invasion robbery.

One of the two women in the home was pistol-whipped, and had minor injuries. 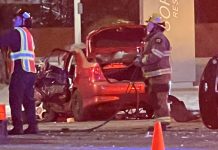