At approximately 6:07 a.m., Price Police officers were dispatched to a report of a stabbing in the area of 200 N. 100 West, said a Facebook post.

“There were two victims and an additional witness inside the residence,” the post said. “The suspect had fled on foot.”

The two victims were transported to Castleview Hospital in Price in stable condition. One was subsequently transported by Life Flight to Provo.

The Carbon County School District was notified of the incident and alerted parents to avoid the area, the post said. Carbon High School is just northeast of the stabbing site. There was also a tentative plan for a “soft” lockdown until the suspect could be located.

A citizen saw the suspect hiding in the backyard of a nearby residence just after 7:15 a.m.

“Upon contact, the suspect was armed with a bloody knife and had sustained significant trauma himself,” the PPD post said. “The suspect ignored multiple commands from officers and attempted to flee the area. Officers were able to safely take the suspect into custody following a Taser deployment.”

The suspect has been identified as 29-year-old Colton Samuel Powell. The suspect was transported to a trauma facility in the Salt Lake County area by local EMS and deputies with the Carbon County Sheriff’s Office.

There were minor injuries sustained by officers during the incident.

Officials did not say what the relationship is between the suspect and the victims.

“Due to the ongoing investigation, no further information will be released at this time,” the post said. “Formal charges for the suspect have been referred to the Carbon County Attorney’s Office.” 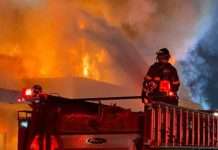