The fire, which prompted evacuations Saturday night, was initially thought to be 10 to 15 acres, said a tweet from Unified Fire Authority. Not long after the evacuation order was put in place, it was lifted.

UFA tweeted Sunday morning: “Our hand crew is back on the incident for a full work cycle amongst other UFA units.”

A tweet from Utah Fire Info said: “Resources on scene include two crews, one helicopter, multiple engines from Unified Fire Authority, state of Utah and Forest Service. Today crews will continue to extinguish hot spots and will be supported by the helicopter with water drops as needed.”

The fire is currently 4.55 acres and it is expected it will be contained by 8 p.m. Sunday.

No structures are currently at risk, the UFA tweet said. 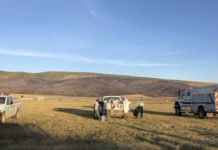 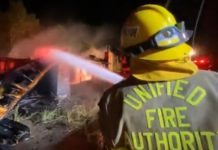