TOQUERVILLE, Utah, May 18, 2020 (Gephardt Daily) — Smoke cleared somewhat in the area of the Anderson Junction Fire near Toquerville, allowing officials to get a better reading of the size of the blaze.

“As firefighters begin to get the upper hand on the #AndersonJunctionFire, smoke has cleared and a more accurate size estimate is at 350 acres,” Utah Fire Info tweeted late Monday.

An earlier tweet said it was estimated that the fire had grown from 50 to 500 acres in about a half-hour Monday afternoon.

Gusty south-southwest winds in excess of 30 mph were driving the flames throughout the day. The fire is north-northwest of Toquerville and officials said although it isn’t directly aimed at the town, they are using the heavy helicopter to make sure the town is protected.

Both directions of State Route 17 are closed between milepost 6 and milepost 0 in Toquerville in Washington County, and drivers are being urged to find an alternate route. 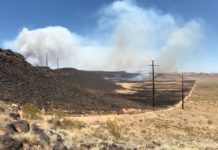