*The video above contains graphic content and may be disturbing to some viewers.

The video, which is 31 minutes and 24 seconds long, shows the entire pursuit, which began at 12:07 p.m. just minutes after emergency dispatchers in Davis County broadcast an ATL (attempt-to-locate) call for a reckless driver on Interstate 15 southbound who was allegedly cutting off cars in traffic and traveling at speeds in excess of 100 mph.

North Salt Lake Police officers spotted the vehicle on U.S. Highway 89 and pursued the pickup truck into Salt Lake City. At 12:13 p.m. the pursuing officer reported the crash, which involved the second vehicle, at 1200 West and 500 North in the Rose Park area.

Driving the passenger vehicle was 33-year-old Thy Hoang Vu, a Salt Lake City bakery owner, who died at the scene. The other person in her vehicle was injured, as were the driver and passenger in the fleeing pickup. In addition, a dog believed to have been in Vu’s vehicle was also killed in the crash.

A news release from the SLCPD on Tuesday evening said: “Detectives assigned to the SLCPD and the Crash Analysis Reconstruction Squad have arrested 39-year-old Christian Cody Facer in connection to the fatal pursuit-related crash that occurred Saturday in Rose Park.”

After the crash, paramedics transported Facer to an area hospital in serious condition. He remained under guard by law enforcement due to the ongoing criminal investigation. Facer was immediately arrested by the SLCPD on Tuesday after doctors released him from the hospital.

Facer was booked into the Salt Lake County Jail on charges of failure to respond to an officer’s signal to stop resulting in death or serious bodily injury, criminal automobile homicide, driving under the influence, ignition interlock violation, driving on a suspended or revoked license, open container/drinking alcohol in a vehicle, speeding, failure to adhere to the right of way, reckless driving, and two counts of DUI with serious bodily injury by negligent operation.

Based on the preliminary investigation, Vu was the driver of a 2014 Nissan Pathfinder T-boned by the fleeing suspect vehicle, a Ford F-250. The identity of the passenger in Vu’s vehicle is not being released.

Due to the ongoing investigation, the identity of the passenger of Facer’s vehicle also is not being released at this time.

Investigators believe the dog that died on scene was inside Vu’s vehicle at the time of the crash.

No additional information is being released at this time due to the ongoing criminal investigation. 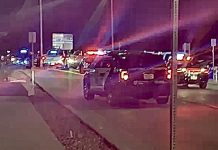