The 22-year-old woman, whose name was not released, was flown to Ogden’s McKay-Dee Hospital after the attack, which sent the woman airborne and left her with lacerations and a compound fracture to one leg, Lt. Eric Stucki, Utah Park Services, told Gephardt Daily.

Earlier reports suggested the woman was gored, but Stucki said the lacerations could have come from either bison horns or from falling onto rocks after being thrown. The wounds were not deep, and the compound fracture was the more serious injury.

Stucki said the woman is in good condition at the hospital.

Witnesses saw the woman struck by the bison, Stucki said, adding that it happened at about 7:25 p.m Friday.

“When a bison lowers its head and strikes you, lifting does occur,” he said, referring to reports she was thrown through the air.

“She was running, ahead of the other guy she was with, and the acquaintance was behind her, with dogs,” Stucki said. “She had noticed it (the bison) off in the distance. She passed some scouts on the trail, and when she turned and looked again, the bison was right there, coming at her.”

Stucki said there’s no way to know what agitated the bison.

“You just don’t know with wild animals what sets them off, what spooks them,” he said, adding that Antelope Island is home to about 700 bison.

After the Antelope Island attack, witnesses called for help, Stucki said. The victim was flown out by medical helicopter in part because of her compound fracture, he said.

“Sometimes it’s better to have Life Flight that can land right by them if you don’t want to load them up and do a lot of movement.” 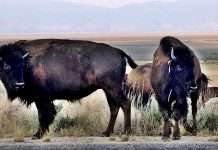 Utah DWR offers safety tips for people who encounter bison on Antelope Island, in the wild