UTAH, Jan. 6, 2021 (Gephardt Daily) — The Salt Lake office of the FBI has issued a new surveillance photograph after a robbery suspect allegedly struck for the third time.

In the surveillance photo from Monday, the suspect is seen wearing a black Detroit Red Wings hat, dark-framed glasses, a gray neck “gator,” black gloves, a dark suit coat with a light shirt underneath, and black shoes with white soles.

The man is seen bareheaded in surveillance photos taken on Oct. 26, 2020, during the robbery of that same Wells Fargo Bank in Murray. He was wearing dark-framed glasses, a white face covering, and a dark suit coat with dress pants and shoes.

Investigators believe the same man, wearing a cap, was caught on camera on Dec. 12 robbing a Chase Bank at 1295 S. Redwood Road in Salt Lake City. He was wearing the glasses, a black shirt, black hat, gloves, jeans, a mask with a print, and dress shoes.

The suspect is believed to be 5 feet 5 inches to 5 feet 7 inches tall, with a slender build. He is Caucasian.

Anyone with information on the robberies or the suspect is asked to contact the FBI by calling the Salt Lake Office at 801-579-1400 or by contacting the FBI tip line at tips.fbi.gov. 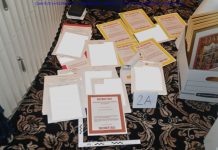