SALT LAKE CITY, Utah, Oct 7, 2019 (Gephardt Daily) — Hogle Zoo has provided an update on one of its two female polar bears, Nora, after she had orthopedic surgery back in February and has spent months mostly out of the spotlight.

“Nora, the 3-year-old polar bear and resident superstar, underwent another round of X-rays Monday,” said a news release from Hogle Zoo Monday morning.

“The playful polar bear broke her arm in January, had corrective surgery in early February and has been on ‘bear bed rest,’ to allow her body time to recover.”

While she’s been on exhibit for short periods of time, her surgical team is back in town for another round of X-rays to determine how well the bone is healing, “and when and if she can be brought back together with Hope, her companion, and/or the possibility of more surgery,” the news release said.

Vets and specialists headed in from multiple locations in early February to treat the weight-bearing bone — which runs between the shoulder and the elbow — with heavy-duty orthopedic hardware such as plates, screws, pins and nails.

Zoo officials think the 500-pound polar bear just played too hard for her own good.

“Keepers found her on exhibit but unwilling to move,” a Hogle Zoo statement in February said. “They monitored her closely for the next two days but Nora didn’t budge — not even to interact with her keepers, which is unusual.”

A full physical examination was performed, including X-rays, which confirmed Nora had broken her humerus bone, rendering her unable to walk.

Nora had metabolic bone disease as a cub.

The other bear, Hope, has remained on display. 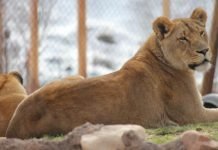