FILLMORE, Utah, May 7, 2021 (Gephardt Daily) — A man who was arrested after sheriff’s officials say he yelled at guests and employees at the Best Western Hotel, threatening to kill them, faces a new felony charge after allegedly attacking a deputy in jail.

Lawrence Frassoldati, 58, is facing a new charge of aggravated assault by a prisoner, a first-degree felony, said a news release from the 4th District Court of Fillmore.

On Wednesday at approximately 5:30 a.m., a deputy at the Millard County Jail was in the control room monitoring cameras, the statement said.

The deputy saw a second deputy walking towards Frassoldati’s cell, after being called to the cell by the suspect, and opening the door. When the deputy opened the cell door, Frassoldati immediately exited the cell, walking into the main booking area.

Frassoldati then allegedly lunged at the second deputy and grabbed him, the statement said, and both fell to the floor. The first deputy ran to the booking area.

“Upon arrival I saw the (second) deputy push Frassoldati towards the booking counter to create space,” the first deputy wrote in the statement. “Frassoldati then got up and charged at the deputy.”

The first deputy deployed a Taser, which was temporarily effective in stopping the incident.

“Frassoldati then returned to his cell stating that he had failed,” the statement said. “Frassoldati was seen and treated for a small laceration on left elbow by medical.”

The second deputy “sustained an injury to his knee, the extent of which is not fully known pending further diagnostic testing, however at this time he is unable to walk or put any weight on it,” the statement said.

A previous probable cause statement described the incident that led Frassoldati to be arrested April 30.

A guest at the Best Western Hotel in Fillmore told deputies she heard the suspect yelling that he was going to kill “the Mormons.” He told one employee that “he killed Osama Bin Laden, works for the CIA, and will kill her as well,” the statement said. Another guest reported seeing the man exit the room “with a rifle slung over his shoulder and confronted the victim, telling him to ‘come at him,’ and that he would kill him as well as everyone in the hotel.”

Frassoldati’s probable cause statement, filed by an officer of the Millard County Sheriff’s Office, said officers were called to the hotel, and they approached the door of the room rented by the suspect.

“I could smell an odor consistent with marijuana use coming from the room,” the officer’s statement said. “I knocked on the door of the room and the suspect stated that if we entered the room, ‘You would be mine.'”

The suspect then exited the room, “with a marijuana pipe in his hand that he was attempting to light,” the probable cause statement said. “As I was speaking with the suspect, he was very agitated. I came up the stairs and he assumed a stance with his fists in the air, like he wanted to fight us. We told him we did not want to fight him, and he began to approach us in an aggressive manner, and the deputy assisting me deployed his Taser.

“The suspect began to fall to the ground, and kicked one of the deputies in the chest  causing him to stumble backwards,” the deputy’s statement said. “I then grabbed the suspect’s arm in an attempt to get him into custody. The suspect grabbed me around the throat in an attempt to choke me. During the incident, his fingernails dug into the skin on my neck, scratching me and causing me to bleed.”

Officers got Frassoldati into restraints and assisted him to his feet, the statement said.

“He told me that he could have killed me when he tried to choke me,” the officer’s statement added.

A pipe with a leafy green substance was located in Frassoldati’s pocket, and “tested presumptive positive” for marijuana, the statement said. After a search warrant was issued for the room, officials located a high-powered .357 caliber air rifle by the door. Five hundred rounds of ammunition for a .22 caliber high powered air rifle were also found in the room.

Frassoldati was initially charged with:

He is being held without bail.

Back in June 2014, Frassoldati was shot multiple times with a Taser after an eerily similar incident at the Hyatt Carmel Highlands hotel in California.

According to local news reports, Frassoldati threatened violence against hotel guests and staff, saying he had killed Osama Bin Laden.

When deputies arrived, Frassoldati allegedly threatened them from a balcony, saying he  had a Beretta and an AR-15 and would kill the first person who walked through his hotel room door, deputies said.

Frassoldati was ultimately subdued after being tased although deputies said he kicked out the rear window of a patrol car after being placed in custody.

Frassoldati was booked into the Monterey County Jail on charges including battery on a law enforcement officer, resisting arrest, making criminal threats, and vandalism. 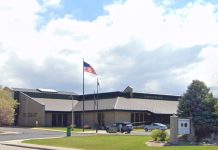 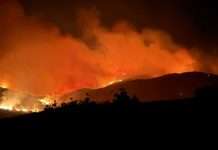