OREM, Utah, May 31, 2022 (Gephardt Daily) — A suspected hit-and-run driver accused of firing gunshots while running from police has been booked into the Utah County Jail.

Gene Patrick Contreras, 35, was arrested in connection with a hit-and-run crash about 7:30 a.m. Saturday near 1000 South and 100 East. Orem police say Contreras fled the scene on foot and fired shots while running toward a home.

When officers returned fire, Contreras barricaded himself inside the home, police said. He later surrendered peacefully and was transported to an area hospital to be treated for undisclosed injuries, according to police. No officers were injured in the shooting.

Police say Contreras was released from the hospital Tuesday and booked into jail.

The Orem Police Department’s Officer Involved Critical Incident Team is looking for a woman in a pink dress who walked away from the accident scene. Police released photos of the woman on social media.

Anyone with information about the accident or the woman in the photos is asked to call the Orem Police Department at 801-229-7070. 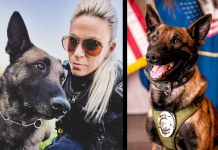 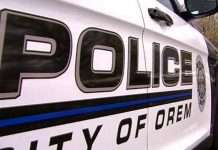