Officers were attempting to make a traffic stop on a 2012 blue Buick LaCrosse on Geneva Road in Provo, said a news release from Provo Police Department. After making several signals for the vehicle to pull over, the blue Lacrosse fled at “high speeds,” the news release said. Officers did not pursue.

“Shortly after the vehicle fled, a Utah County detective and a Pleasant Grove detective with the Utah Major Crimes Task Force located the vehicle near 300 N. 900 West in Provo,” the news release said.

Paul Rassmussen, 48, was seen getting out of the vehicle, the news release said.

“Officers initiated their police lights,” the statement said. “It was reported that Paul Rassmussen pointed a gun at officers. Officers then shot Paul Rassmussen multiple times. Officers were not injured.” The incident occurred at approximately 10 p.m.

Per protocol, the Officer Involved Critical Incident Team (OICI) is actively investigating this incident. The OICI is a team that comprises investigators from several Utah County law enforcement agencies. They will be working with the Utah County Attorney’s Office until the investigation is concluded. 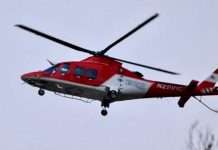