According to a 1:36 p.m. Monday update, the fire is estimated at 30% contained. In addition, more accurate mapping of the fire puts its size at 25 acres rather than the estimated 85 acres reported Sunday night.

“Additional resources, including @AltaHotshots & @DromedaryPeak arrived today on the #FlatLineFire,” the new tweet adds. “Fire personnel will continue to tie in the perimeter to secure the fire’s edge.”

The fire was first reported at 3:30 p.m. Sunday, and is burning about 1.5 miles west of U.S. 40. Utah Fire Info says the fire has been determined to be human caused and under investigation.

Saw teams working through thick vegetation on the #FlatLineFire pic.twitter.com/DFCJwv53WN 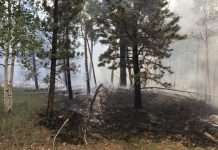 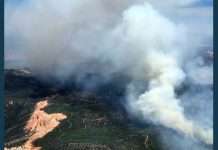