SALT LAKE CITY, Utah, Oct. 17, 2018 (Gephardt Daily) — Police have identified a man who died after being severely injured when he drove a scooter into the back of a parked SUV in downtown Salt Lake City Saturday on afternoon.

Bystanders were performing CPR on the man when first responders arrived. He was rushed to the hospital by ground ambulance suffering severe head trauma.

The Honda RAV4 the man struck was heavily damaged in the crash. 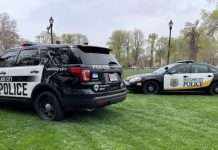